The WWF raises money across the globe to save the orangutan. The organization does, in fact, act to preserve existing national parks that are home to the likeable, funny-faced apes. But at the same time, the WWF – a strong proponent of plant-based energy production worldwide – is aiding its agribusiness partners in annihilating much larger areas of rainforest in the name of sustainability. A years’-long globe-spanning investigative journey took journalist and filmmaker Wilfried Huismann to the Indonesian part of Borneo. There he discovered that in Central Kalimantan alone the company Wilmar International, one of the world’s biggest palm oil players, had already cleared almost 200,000 hectares of rainforest using ruthless slash-and-burn methods. In 2007 the WWF concluded a “Memorandum of Understanding” with Wilmar, pledging support for the company’s Central Kalimantan palm oil operations, which the WWF deems “sustainable”. 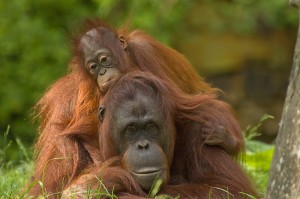 Hundreds of our “forest brethren” have been killed

Travelling by jeep through the Wilmar plantations Huismann bore witness to hundreds of kilometers of industrial monoculture – dead land offering no viable habitat for wildlife. According to surveys conducted by the Indonesian Greenomics Institute, six out of nine orangutan habitats in the new Wilmar plantation areas have already been destroyed. Hundreds of the photogenic great apes – our “forest brethren”, used to such great effect in WWF fundraising campaigns – have been killed as a by-product of forest clearance. The WWF bares partial responsibility for this crime.

In a filmed interview with Huismann WWF Palm Oil Officer Amalia Prameswari defended the collaboration with Wilmar. She said the aim was to encourage the agri-giant to produce “good bioenergy”. She pointed to the fact that the WWF had managed to enforce a measure by which 9,86% of the industrial land concessions would be designated as High Conservation Value (HCV) area and thus protected from deforestation.

Together with Indonesian conservationist Abah Nordin, author Wilfried Huismann drove to the newly laid out plantation Rimba Harapan Sakti, to evaluate the WWF claim. They did indeed find some patches of forest that had been saved from the flames. In one of them Nordin pointed to a treetop: there sat an emaciated orangutan, staring out across the barren land. Nordin summed up: “According to our last survey there are only two orangutans left living here. They’re caught in a trap and will die. There aren’t enough fruit trees in this forest for two apes.” This bit of token “forest” measured 80-hectares – about 900 by 900 meters –specialists say one orangutan family needs about 10,000 hectares to survive. When Huismann queried a group of local plantation laborers one of them said: “The company hires hunters to shoot them. The company protects its property.” It seems the orangutans, in their desperation, had been WWF shares culpability for the mass killing of orangutans “stealing” oil palm fruit.

According to Nordin the orangutans can expect no help from the WWF. A fact the organization affirmed to Wilfried Huismann: it does not have a single orangutan project in Indonesia and runs no rescue centers where the animals might find shelter.

Abah Nordin calls the sustainability label co-founded by the WWF and industrial interests under the banner of the RSPO (Round Table on Sustainable Palm Oil) “fraudulent”. “There is no biodiversity in the plantations” He says “everything is dead. Rats are the only animals left there. The WWF greenwashes the environmental crimes of industry- and takes money for doing it.”

Read more in the book

10 thoughts on “WWF shares culpability for mass killing of orangutans”

Survival International has launched a formal complaint about the activities of the World Wide Fund for Nature (WWF) in Cameroon. “This is the first time a conservation organization has been the subject of a complaint to the OECD (Organization for... END_OF_DOCUMENT_TOKEN_TO_BE_REPLACED

Out now: Japanese edition of PandaLeaks. This is great news! And by the way: 黒書 means “black paper”. Please spread the word. ISBN：978-4-8461-1516-6 END_OF_DOCUMENT_TOKEN_TO_BE_REPLACED