Rhino Hunting with the WWF

An article by Wilfried Huismann

Decision pending: The U.S. Fish and Wildlife Service is still considering whether or not a hunting trophy, the head of a black rhinoceros killed legally under the terms of a hunting license, may be imported into the USA. Dallas-based big game hunter Corey Knowlton has been waiting for over a year for the authorities to come to a decision. 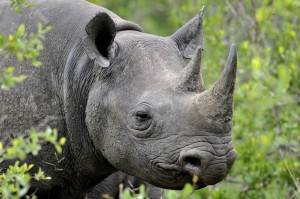 On January 11th, 2014 Knowlton had acquired the license to kill one of the strictly protected animals, of which there are only 4,500 left, at an auction held by the Dallas Safari Club. Knowlton’s winning bid: 350,000 Dollars. This macabre auction, which appears to have taken place with the approval of the WWF and the Namibian government, raised the ire of tens of thousands of animal welfare activists throughout the world and triggered a massive wave of protest. The lucky licensee had to be given police protection. He then hit back with TV spots on Dallas station WFAA in which he attempted to “sell” his position “I’m a hunter. I want to experience a black rhino. I want to be intimately involved with a black rhino.”

The Thrill of the Kill

But Knowlton’s public affirmation of the thrill of the kill only made the animal rights people even more enraged, and the Dallas Safari Club stepped in to do damage limitation. They claimed the sacrifice of this single rhino would support the goal of saving the endangered species from extinction: Namibia would invest 100% of the auction proceeds in rhino protection measures. To support its case the club referenced “experts” from the WWF and the IUCN (International Union for Conservation of Nature), who had asserted that the condemned animal was a “surplus male”, an aging bull no longer viable for reproduction. Worse still: in a fit of envy the aged beast would even kill younger males when they tried to mate with the females of the herd. Responding to these claims in an Internet discussion forum a rhino ranger said they were purely a self-serving cover-up; never in all the decades of his work with rhinos had he ever heard of a rhinoceros elder behaving in such a manner. Another blogger even flatly referred to the WWF as “corrupt”; an accomplice of the hunting industry. Neither of them, however, provided corroborative evidence. So I started to do some digging. As it turned out, I didn’t have to dig all that deeply. First, I discovered an item on the website of Conservation Force, an American hunting lobby group. There it said that the Dallas Safari Club was “providing substantial financial support to the WWF’s LIFE Plus Conservancy Project in Namibia.”1 The director of this WWF program, Chris Weaver, has repeatedly stated that big game hunters are welcome in the “communal conservancies” created by the Namibian government and the WWF in a joint initiative. 22 hunting concessions have been designated within these conservancy areas. There, in exchange for payment of a license fee, wealthy punters are permitted to hunt endangered animals, such as lions and elephants.2 The alliance with big game hunters is also an endeavor close to the heart of WWF South Africa, of which WWF Namibia is an outgrowth, a fact it has likewise never tried to hide: “The WWF South Africa regards hunting as a legitimate conservation management tool and incentive for conservation, and regularly engages with major game hunting associations to promote ethical hunting and combat inhumane practices.“3

In 2004 the Namibian Professional Hunting Association NAPHA, an elite big game hunting outfit, thanked Chris Weaver for the positive collaboration by naming him “Conservationist of the Year”. Ironically enough, the awards ceremony took place not in Namibia, but on the premises of the Safari Club International in Reno, Nevada, USA. Apparently the WWF director is unashamed of his close ties with the hunting industry. In a guest editorial ‘Huntnamibia 2014’, the German-language edition of the Namibian big game hunter’s association periodical, Weaver came out in flagrant support of big game hunting as a business model. In the piece, entitled ‘Trophy Hunting Makes Big Game Valuable’, he asserts that “the nexus of environmental protection and hunting ethics” brings money into the country and “improves the living standards of socially disadvantaged Namibians.”4

Weaver is known within the WWF as the founding father of the so-called communal conservancies. The idea is: Only when villagers are given a share of the proceeds from the protection of endangered big game will they stop seeing the animals as enemies. Tourism in the conservation areas is meant to offer them income and jobs. The most money comes from hunting tourists from the USA, Europe, Russia and the Arab Gulf States – all in hot competition for the limited number of licenses to kill the big game prey and all prepared to pay a horrendous price for the privilege. The license to hunt an elephant, for example, costs around 30,000 Dollars. Officially, the WWF supports trophy hunting solely as a means of helping to maintaining wild animal stocks and to aid Namibia’s poor. But when WWF director Chris Weaver gets together with his hunting cronies, these lofty aims are hardly the topic of conversation. Rather, when talk turns to the new conservation areas it’s really all about, to quote Weaver: “hunting development”. Together, Weaver and J. Jackson III formulated a statement for the powerful lobby organization Conservation Force, of which Jackson III is chairman. In his role as attorney, Jackson had for years worked to get US lawmakers to relax import restrictions on elephant and rhino trophies. In their joint statement Jackson and the WWF big shot beat the drum for Namibia as a hunting destination: “The communal conservancies in northwestern Namibia may be the largest conservation-related hunting development in the world.… Forty-two percent (42%) of the current conservancies are new tourist hunting destinations. The growth in the number and character of the conservancies is one more reason that Namibia is becoming one of the foremost hunting destinations in the world.”5 It sounds there as though environmental protection is no more than a by-product of the hunting industry. Could it be that the massive involvement of the WWF in creating the “communal conservancies” in Namibia is really part of the organization’s lobby work for the well-connected global hunting industry? The WWF is closely associated with Conservation Force, which co-finances the WWF LIFEplus program in Namibia, after all. Principal sponsor of Conservation Force, is, in turn, the HORNADY Company, the world’s largest manufacturer of hunting ammunition with the catchy corporate claim: Accurate. Deadly. Dependable®

Namibia is a veritable gold mine for the hunting industry: in 2014 alone 16,000 legal trophy hunts were carried out there. But that’s just the beginning. Together with Conservation Force, Chris Weaver of the WWF is pushing to see the big game hunting potential of the country exploited still further. According to Weaver, the success of the WWF LIFEplus program has resulted in “community-run trophy hunting concessions” that now offer hunters an exciting assortment: “Twenty-eight different game species are available in the communal conservancies”. Weaver goes on to itemize the WWF-sanctioned kill targets, which include: springbok antelope, lions, leopards, elephants, cape buffalo, crocodiles, hippos, giraffes, kudu “and soon, the black rhino.” Weaver goes on to explain that the “black rhino (is) currently not importable into the United States…. (but) importable to other countries.”6 On the one hand, the WWF makes intensive efforts to help combat the illegal poachers that compete with the hunting industry in southern Africa, on the other hand, it plays an active part in boosting the trade in killing endangered animals. When the trophy-hungry big game hunters arrive in Namibia the WWF is there, too, ready and waiting with practical tips to assist them in their bloody business. On November 21st, 2014 the Namibian Minister for Environment and Tourism gave an opening address to the annual meeting of the Namibia Professional Hunting Association, NAPHA . In his speech the minister let slip that the WWF, in conjunction with the NAPHA, offers a considerable array of hunting training courses, for example the “Big Game Safari Assistance Course”.7

In the months following the macabre Safari Club rhino kill auction in Dallas, conservationists bombarded the U.S. Fish and Wildlife Service with petitions. 135,000 individuals signed the plea to enact a ban on the import of rhino trophies. Never before had the US government bureau experienced such intense public pressure regarding an individual decision. For his part, auction winner Corey Knowlton threatened to demand his license fee back should the USFWS bow to the will of the protesters. Because, he reasoned, hunting made no sense without the trophy.

The US bureau has taken its time deliberating this delicate matter. Perhaps the US authority responsible for wildlife protection is worried about protecting its own image. It wouldn’t look good to stand accused of helping the big game hunting lobby and the WWF transform southern Africa into a veritable – and highly profitable – endangered species slaughterhouse.

An article by Wilfried Huismann, author of the book: PandaLeaks – The Dark Side of the WWF

9 thoughts on “Kill It to Save It”

Survival International has launched a formal complaint about the activities of the World Wide Fund for Nature (WWF) in Cameroon. “This is the first time a conservation organization has been the subject of a complaint to the OECD (Organization for... END_OF_DOCUMENT_TOKEN_TO_BE_REPLACED

Out now: Japanese edition of PandaLeaks. This is great news! And by the way: 黒書 means “black paper”. Please spread the word. ISBN：978-4-8461-1516-6 END_OF_DOCUMENT_TOKEN_TO_BE_REPLACED